Tarn Road Nursery is run by Richard and Nicola Reynolds, the land being leased over a 30 year period from local resident, John Treeby. John has a long history of working the land to the benefit of the environment, and has stated that he wants the field at the rear of the nurseries to be preserved for wildlife in perpetuity! 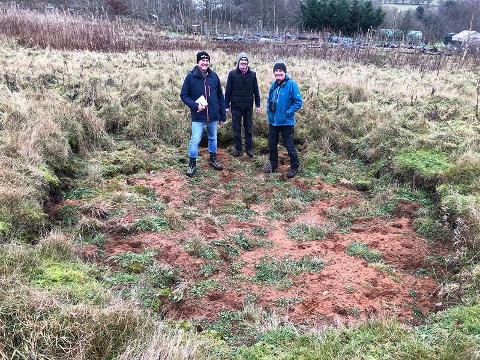 Lease-holders, Richard and Nicola are very keen to develop the field, and B2Z initially approached them with regard to Nicola’s enthusiasm for conserving hedgehogs and providing advice for locals on how to encourage them. She also provides hedgehog shelters to help with their hibernation.

While having these discussions, Richard revealed his enthusiasm for the field which borders the A69 bypass at the rear of the nursery. Initially, this looked like an opportunity for mass tree planting, but once John Miles (wildlife consultant) looked at it, we saw the potential for it being so much more than this.

Sometimes it is better to leave nature alone and disrupt it as little as possible. The existing grassland meadow is a valuable habitat in itself as this was a valuable habitat in itself and could be further enhanced by planting of wildflowers such as cowslip and primrose. This would serve biodiversity goals and carbon sequestration together. That is not to say that trees and shrubs won’t play a part.

The central area of grassland has an accumulation of wire and other refuse. Rather than remove this in a process that could disrupt the ecosystem, birch trees could be planted at the centre which would colonise the area quickly and prepare the way for oaks in a ‘drawing up’ process. These would grow over such items and create a no-go area, while, at the same time, taking away the need to remove the rubbish.

Along the border at the top of the field, further hedgerow infill with pine, beech, hawthorn, yew, holly and blackthorn could provide a noise screen from traffic on the A69 and further enhance the biodiversity by creating a mature hedgerow eventually.

Richard was also very enthusiastic about involving school children. The area offers great potential for an education centre. This might include the establishment of a nature trail with strimmed pathways and ‘silent wardens’ at suitable points i.e. notice boards with suitable information for visitors.

A large depression has already been created at the centre of the field which could have a liner put in and filled to produce a pond. This would attract amphibians (frogs, toads, slow worms and newts) and act as an educational focus – pond-dipping, invertebrate classification exercises etc.

Other ideas included nest boxes for owls – something that John and Richard are very adept at constructing. Children might also relish the chance to be involved in this!

Of course, these ideas are broad brushstrokes at present, but the enthusiasm and readiness of John, Richard and Nicola, together with B2Z’s keenness to facilitate the process hold out a lot of hope for an immediate start.

An encouraging development to these discussions is an event planned for February 27th 2022 by the local scouts to begin planting of trees as part of the Queens’s Jubilee ‘Canopy’ initiative. A local crowdfunding promotion has provided over £500 of sponsorship to plant trees and shrubs on the borders of the meadowland. Further supply of local beech, oak and birch can kick-start the infill of hedgerows and central planting area.

Get involved with our community net carbon zero projects!